The Electronic Trade Documents Bill, introduced on 12th October, is an incredibly important piece of legislation allowing the digitalisation of trade documents. It hopes to boost the UK’s international trade and reduce the estimated 28.5 billion trade documents printed and distributed around the globe every day. 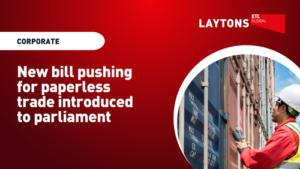 This change looks to transform British trade by lowering administration costs and minimising contract processing times from 7-10 days to as little as 20 seconds, as well as reducing carbon emissions by at least 10%. Electronic trade documents also increase security and compliance by making it easier to trace records – for example, by using distributed ledger technology and blockchain.

Under this new bill, digital trade documents will be put on the same legal footing as their paper-based equivalents to give UK businesses more flexibility when it comes to trading.

The Bill will also modernise old legislation such as the Bills of Exchange Act 1882 and the Carriage of Goods by Sea Act 1992. However, the government has stressed that no business will be forced to use electronic trade documents, emphasising allowing the use of practices and processes that work for each individual company.

The Bill being introduced into Parliament follows a review of the law by the UK law commission and their report recommending the law to be updated https://www.lawcom.gov.uk/electronic-trade-documents-bill-introduced-to-parliament/ The law takes account of the UN Model Law on electronic Transferable Records (MLETR) which will hopefully make it compatible with the legal systems of other countries.

If the proposed legislation is enacted shortly the UK could be the first G 7 country to enable such digital international trade.

Paddy Kelly, Partner at Laytons ETL, Corporate Department, commented: ‘This new legislation represents a real shift in digital trade for UK businesses. In the current economic climate, I believe this can only be a good thing, and I look forward to seeing firms across the UK and throughout the world secure the real benefits of this new Bill’.

Laytons International Trade Lawyers are able to advise on the adoption of the proposed new law into your international business.